Looking at the best backhand practitioner in today's modern game namely Mr Roger Federer, one wonders how he does it so well.

If one were to observe his strokes carefully, there are a few things that you will notice that he does it better than other pros on the circuit.

1. Setup quickly
- He is able to do it quickly in between movements. IE his setup is quick and efficient

2. Excellent Disguise
- You can never tell he is going to slice it or going to drive it

3. Ability to whip it when it matters
- He seems to have a lot of racket speed going into it.

In other words his stroke is efficient and effective.

IMO these are what I believe he is consistently doing in his preparation for the hit
1. Initial weight seems to be on the backfoot.  Movement to a  near ball or far ball involves landing on back initially most of the time
2. Upper body half turn with racket being held by both hands. Again the upper body turn is always initiated after the racket has been locked at the neck by his non-hitting hand before the half shoulder turn
3. Head is kept still and eyes looking far out ahead although shoulder has turned.

Movement to ball
==========
With these semi- locked up upper body positions, he initiates moves towards a hitting position (note : not towards where ball is going to land) but a position where he can land on his back foot that allows him to initiate a swing towards the ball as it is coming up.

Back Leg Planted
==========
As the ball is coming down, he is already planted on his back leg and this is when the shoulder further turns back bringing the locked racket further back and DOWN (below the point of contact) and racket frame at this stage is almost parallel to the back fence and right back shoulder is being shown clearly to the opponent. 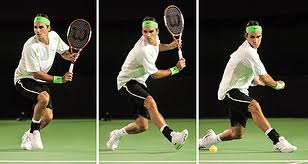 Racket Grip released at Neck
=============
At about this time racket grip is released at neck and both hands start uncoiling away from the centre while lower body weight is transferred from back leg through stepping of the front leg. The uncoiled front hand unleashes a low to high swing motion towards meeting the RISING ball in front of the front leg.  If done correctly through even distribution of uncoiling of BOTH hands, the power should feel like both LEFT and RIGHT shoulders SEPARATING with the resulting power unleased into the swing. And the front leg should also feel like it is pushing up into the swing instead of forward.


With this modern way of executing a FEDERER like backhand, the stroke will feel a lot more like a
- double handed backhand ( in terms of quickness in stroke execution) but at the same time
- loses the advantage of leverage due to HAND extension (as power comes from uncoiling and front leg pushes up instead)

Try it and let me know your thoughts on my analysis